This year’s celebration was organized under the slogan „Saint Sava protects as because we mean harm to anyone“ and it symbolically stands for joint efforts aimed at improving our education and restoring the reputation and social position of all who work in the field of education. Saint Sava awards were granted to preschool institutions, primary and secondary schools, as well as to the best university students and best primary and secondary school pupils.
The performance, directed by Kokan Mladenovic especially for this occasion, paid honour to Saint Sava, an outstanding figure in the Serbian culture, in a modern fashion. The performers who added to the splendour of this celebration were Belgrade Philharmonic Orchestra, Sanja Ilic & Balkanika, Teodora Bojovic, Pavle Aksentijevic and Biber band, music band Vroom, Sladjana Milosevic, Academic Choir „Obilic“, children’s choir „Carolija“. 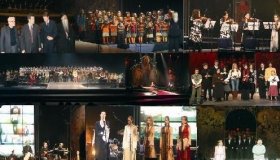